Global equities enjoyed a solid year with a significant proportion of returns driven by the strength in US equities. Buoyed by US tax cuts in December 2017,
strong earnings momentum, high business and
consumer confidence and regulatory reform, the
S&P 500 Index reached record highs in August 2018. International equities (global ex US) also finished in positive territory as worldwide growth lifted investor sentiment. However, trade war concerns have cast a shadow over the economic outlook.

Regional Equities Global & International Equities Income & Fixed Interest Multi-Asset Investments
Global equities enjoyed a solid year of performance, although a significant proportion of returns were driven by the strength in US equities as the US market left other developed markets in the shade. Buoyed by the Trump administration’s tax cuts in December 2017, strong earnings momentum, high business and consumer confidence levels and regulatory reform, the S&P 500 Index reached record highs in August 2018, with large technology names such as Amazon and Apple enjoying the most eye-catching gains. 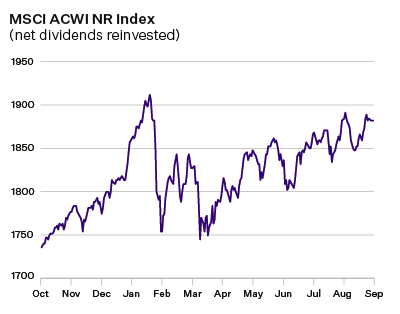 International equities (global ex US) also finished the period in positive territory as synchronised worldwide global growth lifted investor sentiment towards the beginning of the period. However, it was not all plain sailing over the year. Trade war concerns ramped up in March and September 2018, casting a shadow over the resilient economic outlook as President Trump announced US$200 billion worth of tariffs on Chinese goods. China retaliated with tariffs of its own on US$60 billion worth of US imports.

JOHCM Global Select performed well, benefiting from strong stock selection, which was in large part attributable to a good showing by our financials and consumer staples holdings. Within this high-alpha, benchmark-unconstrained strategy, we remain focused on finding interesting idiosyncratic stocks (i.e. relatively low correlation to sector or country) that are less affected by the highly correlated passive/ETF/macro-driven global investment flows that dominate today’s global investment environment.

JOHCM International Select, a global ex US version of the aforementioned strategy, also substantially outperformed its benchmark over FY2018. Stock selection was materially positive across a number of sectors, particularly financials and consumer discretionary, with Japan’s SBI Holdings and Cyber Agent among the best individual performers. Both the Global Select and International Select strategies are soft-closed to new investors.

Looking ahead, the team anticipates greater market volatility and is therefore holding a higher than usual cash balance. The team’s top-down scorecard has become more defensive and late cycle. As a result, they started to slowly reduce the current overweight in materials and reduce the underweight in healthcare.

The JOHCM Global Opportunities strategy aims to construct a portfolio capable of surviving in all environments and able to thrive in many. The portfolio underperformed in relative terms as sector allocation dragged on relative returns. This came predominantly from holding a high cash position during rising markets and being underweight in technology at a time when investors chased large cap technology stocks to new highs. But with valuations and leverage also at record highs, the team feels there is much to be cautious about in global stock markets. Their response to elevated valuation levels is to build a diversified portfolio out of companies which are neither extreme ‘value’ or extreme ‘growth’, but with solid franchises and balance sheets, with more tailwinds than headwinds, and trading on sensible multiples.

Read more about our investment team
The MSCI World ex Australia (Std) Index (net dividends) – the benchmark for the Pendal Concentrated Global Share Fund - gained 20.82 per cent in Australian dollar terms over the 12 months to 30 September 2018. Gains from the US outstripped those from other major markets, driven largely by 'new economy' stocks such as Amazon and Netflix. Japan also had a strong year, while the European markets lagged, although France and the United Kingdom managed decent returns in an absolute sense.

It is now just over two years since the launch of the flagship Pendal Concentrated Global Share Fund in August 2016 and the business is tracking well.

One of our stated aims at the beginning of the year was to build our engagement with key gatekeepers, particularly research houses and platforms and to try to get early traction. Pleasingly, we were able to obtain a ‘Recommended’ rating from Lonsec at the very first review. We have also entered into the review process with Zenith and anticipate receiving our initial rating from them in 2019. A favourable view from the research houses helps gain traction with investors as the fund’s track record builds. Likewise, we have steadily gained platform representation throughout the course of the year, increasing our exposure to many more potential clients.

In this regard, we are pleased with the strategy’s size at this stage of our development, with $289.6 million in the fund as at 30 September 2018. We have also launched a separately managed account (SMA) model of the strategy, catering to investors who want the greater visibility on holdings and individual tax treatment. The SMA model has also been added to platforms and is generating inflows.

The fund’s performance has been competitive, delivering 18.06 per cent per annum since inception, coming in ahead of its benchmark, before fees. However, the fund ended the 12 months to the end of September 2018 -1.03 per cent behind the index, before fees, with most of the returns given back at the tail end of the period. A higher cash allocation and not owning several of the high-profile new economy and technology stocks such as Apple, Microsoft and Amazon dragged on performance. We remain comfortable with our positioning on the FAANG stocks – only owning Alphabet (Google) – even though this underweight has dragged on relative performance. Our positions in Belgian-based beverage conglomerate Anheuser-Busch InBev and Japanese bank Concordia Financial also detracted. A large degree of this was offset by strong stock selection in Germany, where our position in the Deutsche Boerse outperformed an otherwise lacklustre equity market, as well as strong performance from Discovery Inc, Union Pacific Corporation and Boeing Company in the US.

We believe that the strategy is well positioned to perform. Several of the factors which have seen strong performance across the global market index in recent years, such as low interest rates and quantitative easing, are now becoming headwinds. At the same time we are seeing pockets of extreme valuation among the growth sectors as well as material macroeconomic uncertainty surrounding issues such as Brexit and US-China trade frictions. The implication, we think, is that investors need to be concentrated and index-agnostic in their approach to global equities. There are certainly attractive opportunities in the asset class, but there are also areas best avoided. This environment is well suited to our approach, which is finding stock opportunities in what we consider the one or two best companies in their peer group, in parts of the market that are being temporarily mispriced.

Read more about our investment team
Emerging market equities began the period strongly, boosted by a weaker US dollar, recovering corporate earnings, a synchronised global economic upturn and investor demand for technology stocks. Unfortunately, many of these factors reversed over the period and provided headwinds in the latter half of 2018. 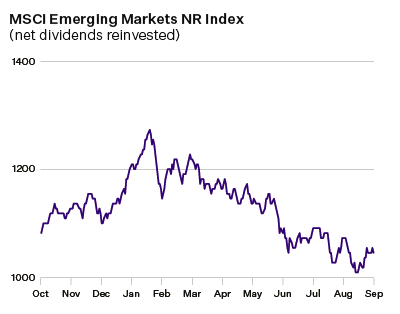 Most notable amongst these pressures was the surging US dollar, as the Federal Reserve continued to normalise interest rates against the backdrop of a strong-performing US economy. Rising US interest rates have particularly hurt emerging markets that are heavily dependent on external financing, such as Turkey, Brazil and South Africa. Trade war concerns triggered by aggressive rhetoric from President Trump and the imposition of tariffs on Chinese exports to the US, along with fears over contagion from the Turkey and Argentine crises caused by economic mismanagement, also soured appetite for the asset class and led to substantial investor flows from the asset class.

Our Global Emerging Markets Opportunities strategy lagged the index against this challenging backdrop. The strategy takes an assertively top-down approach, with the team placing significant emphasis on making the right country allocation calls. This is complemented with a stock selection process that focuses on identifying quality growth stocks within these countries. Over the period, our underweight call in Brazil, our overweight position in India and our Chinese holdings made positive contributions. However, this was negated by weakness in our Brazilian, Russian and Taiwanese names. The strategy enjoyed healthy net flows over the year, particularly within its US mutual fund where assets passed through US$500 million.

India remains a market where the team sees significant potential and is one of the largest active overweights in the portfolio. A solid recovery following the Goods and Services Tax introduced last year has helped boost Indian equities and the earnings picture here looks bright. The team still feels conditions are in place for growth to explode over the next two years, helped by the potential for an uptick in the credit cycle. In the short term, a general election to be held by 2019, at the latest, means it is likely we can expect plenty of fiscal stimulus by the Modi government to ensure that the Indian economy is firing on all cylinders going into the polls. Indian holding Reliance Industries was among the portfolio’s top performers over the period. It has enjoyed a strong share price run since the firm’s AGM in July 2018, when the company announced the launch of ‘Jio GigaFiber’ fibre-to-home service, and its

‘Jio Giga TV’ set-top box. Reliance reported strong figures in the period, particularly for its Jio arm, which has seen rapid increases in its customer base.

In China, stock selection was particularly strong, with our oil names, China Petroleum & Chemical and China National Offshore Oil Corporation, performing well. This is a good news story, which we felt had been overlooked by the market. Since President Xi Jinping came to power in 2013, his programme to crack down on corruption and malpractice has had a significant effect on the operating and financial metrics of these companies. With investigators scrutinizing offshore and domestic spending, costs have declined materially.

The JOHCM Global Emerging Markets strategy had a challenging year as stock selection weighed on returns, particularly within the financials and technology sectors, most notably in Taiwan. This bottom-up strategy has a flexible all cap growth style and aims to identify companies demonstrating strong and improving operational performance, focusing particularly on changes in earnings momentum.

Our other emerging markets strategy, JOHCM Global Emerging Markets Small Mid Cap Equity Fund, employs a distinctly bottom-up stock-picking approach aiming to find growth companies that have the potential to develop world-class products or become industry leaders in their local market. The strategy enjoyed strong performance over the period as strong stock selection outweighed negative sector allocation effects. Indian luggage maker VIP Industries was a strong performer over the period. The company recorded a significant jump in net profit in its latest results. With strength in all four of its brands, a relatively strong Indian economy and travel sector, the company expects continued strong growth.

The portfolio has become more defensive in recent months. The team have increased exposure to healthcare and consumer names, particularly domestic-orientated Chinese brands. Trade concerns continue to play on investors’ minds and have dominated headlines for some time. More domestically-focused names have seen a re-rating as a result, and the portfolio continues to benefit from holdings in this area.

Read more about our investment team
Back to top